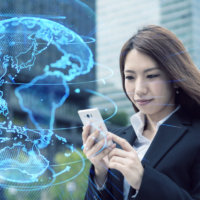 Chinese companies are increasingly moving into our direction. This movement will certainly change the rules in Belgium/Europe, both on a commercial and technological level. But what exactly is going to change?

First of all, the principle of ‘the winner takes it all’ prevails in China. This means that brands eliminate their competitors, like Alibaba does in an aggressive way. At the moment, this principle is not so present in Europe as in China.

Besides that, Chinese companies think ‘mobile first’ and use a lot of data. In Belgium, we do not use our mobile as much as they do in Asia, but that will probably change in the upcoming years.

As mentioned above, Chinese brands are more and more coming to Europe. Think about brands like TikTok, Huawei and AliExpress. At first, these brand were very popular in China. But somehow they also managed to conquer Europe.

Jacco, an Asia expert, researched this trend and came up with seven marketing concepts to better understand this phenomenon.

China is committed to growth and therefore enjoys a high GDP. The GDP isn’t growing as much as in the last booming years, but is still impressive compared to the European GDP growth.

The growth is all about helping the middle class. Many Chinese move from the rural areas to big cities and are ready to use cars, mobile phones, and so on. This growth will definitely affect the West.

2. The winner takes it all

China is all about speed and eliminating the competition. Jack Ma for example lets two teams compete against each other. The winner takes it all and the other one gets eliminated.

In China, people use their mobile as much as possible. Do you want to donate to a homeless? Then cash is no longer accepted when using WEchat. This app lets you scan a QR code, which will transfer your money to a homeless through mobile.

In China, it is accepted that the government can take a closer look into your life. As a Chinese, you have a certain credit on your name. If you have done something that’s against the rules, your social credit goes down. This can have some serious consequences, like for example no longer being able to travel abroad.

In Western countries, there is a decline in the amount of retail stores. In China on the other hand, physical retail is growing again. Jacco calls it: phygital – digital infused, combining online & offline retail.

We see that branded and flag stores do it very well in China, which means we can learn a lot from Chinese brands.

Take the Hema store of Alibaba for example. This is a very new retail concept store, where AR is connected. At the store, you can find fresh food, scan barcodes to trace the safety of your food, pay by facial recognition or via an app, and have your ordered food delivered within 30 minutes.

E-commerce in China is becoming a huge platform for stores to build their brands. It is no longer about conversion, but about building your brand.

Alibaba, for example, already built an eco-system and can offer you a very powerful database.

In China, social commerce is about the power of the herd. People chase the wolf. With this, Jacco refers to the online comments people leave behind after buying something.

The more comments there are, the more the conversion will go up. Due to a lack of trust, social commerce is very powerful in China.

What did we learn or what can we conclude from Chinese brands?

Find out how our experienced marketing & sales consultants can support you in this time of change.

This website uses cookies to improve your experience. We'll assume you're ok with this, but you can opt-out if you wish.

Any cookies that may not be particularly necessary for the website to function and is used specifically to collect user personal data via analytics, ads, other embedded contents are termed as non-necessary cookies. It is mandatory to procure user consent prior to running these cookies on your website.

Unleash a River of Sales

Get FREE marketing guides, studies and hands-on tips to increase your sales. Enter your email below to subscribe. You can unsubscribe at any time.