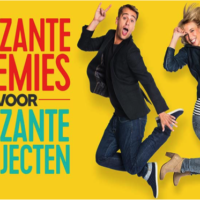 Although more and more people find a way to get their projects funded, there are still a lot of people who aren’t aware that crowdfunding could be their funding solution.

With this knowledge in mind, Hello crowd!, the crowdfunding platform of Hello bank!, and Qmusic, a Flemish radio station, joined forces in a media partnership to create an awareness campaign around crowdfunding.

This campaign aired nationally for about three weeks, and was supported by a landing page on Qmusic’s website. The partnership between Hello bank! and Qmusic was announced through several billboards and was clearly visible on their website.

In the first week of the campaign, the two radio hosts that would host the campaign launched a call to the listeners to submit their crazy, warm, funny, socially responsible … projects on the website.

In the second and third week of the campaign, a jury rewarded one project a day (every weekday) with a cash price to let the listeners’ ideas come to live.

The jury was composed of one Flemish celebrity and a couple of listeners (‘the crowd’) which were replaced every day. They decided which project received a reward, and the amount of the reward.

In total they handed out 50.000€, which was donated by Hello crowd!, the crowdfunding platform of Hello bank!.

When the campaign ended, 10 projects were rewarded. The ones that weren’t selected by the jury, could of course always submit their projects for funding via a crowdfunding campaign on Hello crowd!.

Evaluation of the partnership

Both Hello crowd! and Qmusic experienced the campaign and the partnership as positive. The campaign as proof of concept worked really well, and so this could be repeated in the future.

The next step was to implement a similar campaign on a Walloon radio station, Radio Contact, in September 2016.

What’s in it for me?

The question Hello crowd! asked itself before they agreed to join forces with Qmusic was of course “what’s in it for me?”. Hello crowd! offered a sponsoring budget of 50.000€ to hand out as rewards. In exchange, they got:

What was not in it for me?

Although the list of submitted projects that was given to the bank was very elaborated, the bank also would have liked to gather as many (commercial) opt-ins as possible.

Gathering these opt-ins isn’t really too hard to implement, however getting permission from the Legal & Compliance department to use these data afterwards is a really long and difficult process.

Hello crowd! had set up 3 key commercial objectives, but without any concrete KPI’s.

One of the key learnings of this campaign is that there is definitely still a lot of creativity and good heartedness in Belgium. Listeners submitted a total of 2.027 projects on the landing page, of which 10 were rewarded by the jury.

On top of that, 50% of all participants has given their opt-in to be contacted by Hello crowd! after the campaign.

After the campaign, Hello crowd!’s part of the job just started. After a first selection of the remaining, non-rewarded projects submitted on the campaign landing page, a part of all submitters received an email with more information about crowdfunding and Hello crowd!.

Some of the project owners were contacted directly by Business Developers of Hello crowd! and were asked to submit their project because of the high potential value of success.

Two months after the campaign ended, 21 of the 2.027 projects were submitted on hellocrowd.be:

The retained projects will now have to work on their own campaign, but will be guided by the Business Developers. Overall they should have a 70% chance of gathering all the funds they need to make their projects a reality.

Today there are still projects being submitted on Hello crowd! following the campaign.

So this is what Hello crowd! learned from the media partnership with Qmusic:

Click here to read the recap article of Medialaan about the success of the campaign.

Click here to read the press article of Hello bank! about the campaign with Qmusic.

Media coverage about one of the rewarded projects.

Media coverage about another rewarded project.

Looking for ways to stand out from your competitors? Get in touch and we will help you build strong brand awareness!

In cooperation with Yungo and Starring Jane